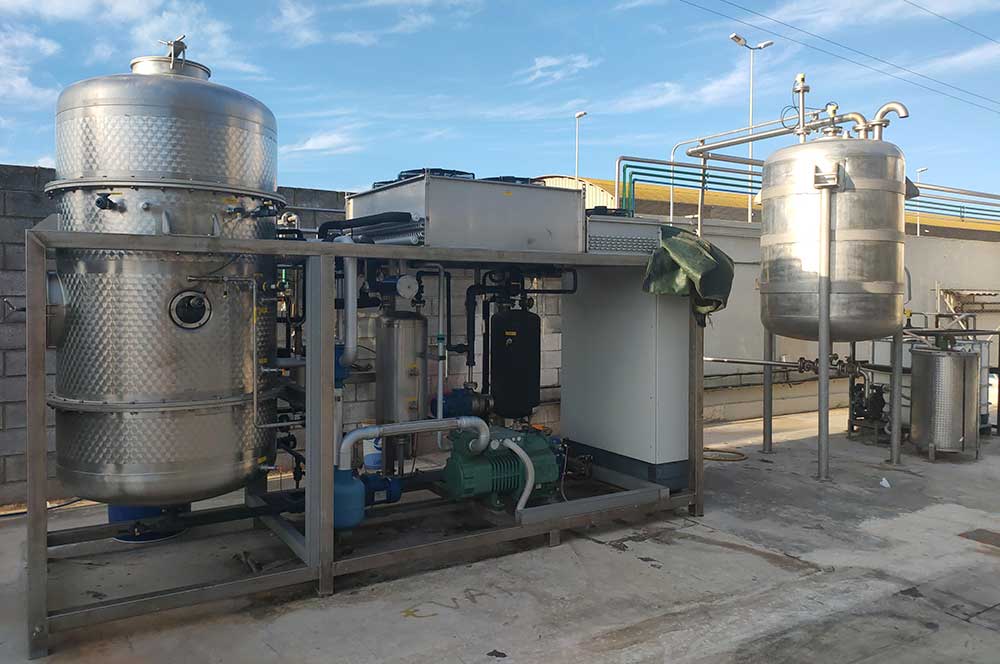 Until 2020, Omar Coatings generated more than 1,500 tons of wastewater in the resin manufacturing plant. This volume of wastewater had to be transported to other waste management plants by tanker, subcontracting the waste treatment and increasing its environmental impact.

Omar Coatings’ concern for the environment, which for years has been implemented, led the company’s management to decide to implement a system that would reduce the impact generated by the manufacture of its products. The chosen system is based on clean production, defined as the continuous application of an integrated strategy of environmental prevention in processes, products and services, with the objective of reducing risks for human beings and the environment, increasing the company’s competitiveness and guaranteeing economic viability

The process implemented is based on two totally differentiated operations. During the first operation, the wastewater is evaporated, valorizing the concentrate obtained and sending the evaporated water to the second treatment, a biological treatment.

The biological treatment of the evaporated water is the final part of the process. The water is sent to a biological reactor where the contaminants in the water are degraded and biomass is formed. The biomass and the purified water are separated by the action of membranes.

The biological reactor system with membranes allows the treatment plant to require less space for its installation. With this process, a clean water stream is obtained, suitable for discharge to the public sanitation system. However, the purpose of this water is to be reused for cooling the reactors in the resin plant. Reusing a waste stream and reducing the water resources consumed by the plant.

This project was based on the TFM (Final Master’s Thesis) of Guillermo Collado, responsible for Resin Quality at Omar Coatings.  His research work focused on the design of the evaporator and, later in Omar Coatings, the biological part of the process was developed.

At Omar Coatings we are proud to contribute to the conservation of the planet, therefore, we research and develop not only more environmentally friendly and less polluting processes, but also the manufacture of coatings that combine sustainability with performance.

Accept Decline Cookie Ajustes
I consent to the use of following cookies:
Cookie Declaration About Cookies
Necessary (0) Marketing (3) Analytics (2) Preferences (0) Unclassified (0)
Necessary cookies help make a website usable by enabling basic functions like page navigation and access to secure areas of the website. The website cannot function properly without these cookies.
We do not use cookies of this type.
Marketing cookies are used to track visitors across websites. The intention is to display ads that are relevant and engaging for the individual user and thereby more valuable for publishers and third party advertisers.
Analytics cookies help website owners to understand how visitors interact with websites by collecting and reporting information anonymously.
Preference cookies enable a website to remember information that changes the way the website behaves or looks, like your preferred language or the region that you are in.
We do not use cookies of this type.
Unclassified cookies are cookies that we are in the process of classifying, together with the providers of individual cookies.
We do not use cookies of this type.
Las cookies son pequeños archivos de texto que los sitios web pueden utilizar para hacer que la experiencia del usuario sea más eficiente. La ley establece que podemos almacenar cookies en su dispositivo si son estrictamente necesarias para el funcionamiento de este sitio. Para todos los demás tipos de cookies, necesitamos su permiso. Este sitio utiliza diferentes tipos de cookies. Algunas cookies son colocadas por servicios de terceros que aparecen en nuestras páginas.